It’s been rather quiet lately. Fans are still waiting for news regarding the reboot and project announcements for their favorite cast members.

(For daily news and to discuss all the topics, you can find me on Twitter and on the MacGyverOnline Forums.)

What are Cast and Crew up to?
We got a new Lucas Till sighting on October 29, thanks to family friend Rodney Carter. It was presumably taken on the day of the funeral of Lucas’ grandmother in Tallahassee (Florida).

Back in May, Lucas filmed a pilot for The Spook who sat by the Door in Baltimore. Sadly, it looks like FX has passed on the project. On October 28, executive producer Leigh Dana Jackson (who had written the pilot script) tweeted about being (understandably) disappointed.

This is a bummer; considering how excited Lucas was about the book the script is based on. To be fair, the news didn’t come totally unexpected with no updates since July, FX ordering more pilots and greenlighting shows lately plus one of the main actresses getting cast in another show a few weeks ago.

Since FX is listed as the distributor and not as the production company on IMDb, I thought Leigh and/or producing company Lee Daniels Entertainment might be able to take the project elsewhere. But as Leigh tweeted a few days later (by answering someone’s suggestion about pitching it to Netflix), the “studio” owns it. I’m not sure to which studio he was referring to, since 20th Television is also attached.

For now, it looks like the project is done unless FX sells it or revives it in a few years. But even if it gets made after all, it might be with a different cast and crew.

Less than 3 weeks after returning to Atlanta from London, Levy Tran has returned to Europe; presumably to film more scenes for Expendables 4. This time, she travelled to Sofia (Bulgaria). She posted a first BtS photo from the London set; showing off a new hair color (presumably a wig).

Tristin Mays got into the Halloween Spirit a few days early; filming a short clip tackling crow problems. As Tristin stated, she made the costumes herself. She collaborated with Marlon Webb, who’s involved in the “Pirate Project” she did a few months ago. If I remember correctly, she had also designed some of the pirate costumes.

Henry Ian Cusick will attend German Comic Con in Dortmund (3.-5. December). You can book your autograph signing or photo op here. According to IMDb, he’s attached to 6 projects currently, but none of them have had updates recently. Two movies are already in post-production. The one with Peter Lenkov attached as producer has already been filmed last year and will probably be the next one being released.

Justin Hires keeps doing stand-up-comedy-shows, podcasts and working on his music. He also invested some of his money; buying a multi-family property. He hinted at working on something, but there’s no official news yet.

While Sandrine Holt will make an appearanace on NCIS LA soon, I haven’t seen the rest of the cast in other projects yet.

The #SaveMacGyver Movement
ICYMI: For the MacGyver Con, a total of 5500 USD was raised for charity. The official SaveMacGyver website gets updated regularly; so check there to keep up with news or their social media accounts.

CBS Fall TV Season Ratings
The better MacGyver looks in comparison to the shows on the current CBS schedule, in streaming numbers (e.g. on IMDbTV) and in syndication, the more appealing it is to do something with it. There is still money to be made by selling the rights, ordering more merchandize (e.g. books) or greenlight a Spin-Off.

There were reruns last week, but let’s take a look at the current Friday ratings.

As predicted early on, it looks like SWAT is the winner here; getting to keep it’s Friday slot instead of being pushed to Sundays 10pm. For now, CBS will air reruns on Sundays; starting with reruns of the pilot episodes of their rookie shows.

Other MacGyver-related News
CBS released a BluRay boxset of OG MacGyver on November 2. I didn’t see any official promo for it.

The MacGyver Reboot is quite popular on streaming services. Since IMDbTV made it available to stream in the US, it has been in the Top 10 section for 43 days.

The Houston premiere for the second production of MacGyver The Musical has been set for February 2022. Casting for roles is underway (online submissions closed on October 22). Check the dates and book tickets here.

The official MacGyver website also launched a design contest for the musical. You can win over 2500 US Dollars in cash prizes. If interested, check the entry information here. Houston Stages already have key art, so maybe it’s for the next musical that should open in May. The location hasn’t been announced yet.

Other MacGyver-related news in recent weeks you might have missed:

While the fans continue fighting for Season 6, we got a DVD release for Season 4 and more premiere dates for Season 5 internationally.

(For daily news and to join the discussion, you can find me on Twitter and on the MacGyverOnline Forums.)

What’s going to happen now?
On May 19, CBS revealed their new Fall Season schedule. The Friday 8pm slot goes to SWAT for a handful of episodes. Around midseason, SWAT will move to Sundays 10pm to replace SEAL Team (which in turn will be moved to Paramount+). The 8pm time slot will be filled with unscripted / reality shows.

At the moment, CBS airs two reruns of Magnum PI on Fridays, starting 8pm. Next month, the reruns will be dropped to make room for reality shows Celebrity Home Renovations (8pm) and Love Island (9pm) and Greatest AtHome Videos (9pm) in August. It’s safe to say that there won’t be anymore MacGyver reruns. Interestingly, CBS has reruns of cancelled show NCIS: New Orleans in the slot that will go to NCIS: Hawaii in Fall.

May and June are usually the months when scripts get written, edited and approved. While most Fall shows on the networks have already cast their leads, it’s still possible that former cast members of MacGyver will turn up as guest stars somewhere.

What are Cast and Crew up to?
ICYMI: Last month, Lucas Till’s movie “Son of the South” premiered in Australia and New Zealand. While cinemas are opening again around the world, the movie might get some more theatrical release dates before blockbusters will fill up the schedules. For example, Filmstarts lists August 5 as starting date in German theatres (probably in limited capacity). Because it already had an official theatrical release, it won’t be allowed to run in festivals like Cannes or Venice, though.

Lucas got cast in “The Spook Who Sat by The Door” Pilot at FX; playing CIA Agent Graham Renfroe. They started filming on May 24; finishing up after 15 filming days on June 12. A day later, Director of Photography Isiah Donté Lee posted the only BtS photo of Lucas in his Instagram Stories.

We don’t know how long it will take to get the news if the show has been ordered to series or not. While some fans were unhappy about Lucas not being available for MacGyver anymore, you need to remember that it’s not clear yet if his would would be a regular or even recurring role. And even if MacGyver gets un-cancelled or revived, it might take months or years for the show to go back into production.

While Justin Hires has been doing more comedy shows, podcasts (e.g. interviews with Tristin Mays and Henry Winkler for Patreon), releasing new music and filming music videos, we don’t know much about what the others have been up to. Levy Tran has been working on her martial arts skills (including a little misshap with a sword and a wall); the instagram videos of her instructor indicating that she is still in Atlanta.

In a recent Instagram post, Tristin Mays mentioned in the comments that she will be back in Atlanta in about two weeks. It’s not clear yet if she’ll just visit her home plant babies or if she’s booked for a project. Considering that there are several dozens projects being filmed in Georgia right now, it’s not unlikely that she got another job.

The Season 4 DVD
In the US, the Season 4 DVD has been released on June 8. Sadly, there’s no bonus material on it; same as with Season 3. No love was put into the DVD design, either.

So far, there’s no information about potential Bonus Features on international DVD versions; but let’s hope for the best. It would be a first for the German DVD versions to not have any Extras on it.

The official website gets updated regularly; so check here to keep up with news. In the meantime, fans have been creative with designing Season 6 posters, trailers or t-shirts and postcards.

Other MacGyver-related News
In recent weeks, Costume Designer Sarah Downer has uploaded several BtS photos taken during costume fittings; e.g. of Henry Ian Cusick in his kilt (for Episode 5×12) plus a mood board for Russ Taylor, of Tristin Mays in dresses (for Episode 3×11), of Lucas Till (for Episode 5×11), of George Eads alone and in comparison with Tristin Mays (in a Metallica Shirt), of Levy Tran (for Season 4), of Justin Hires (Seasons 4 and 5) and of Meredith Eaton (Seasons 4 and 5). 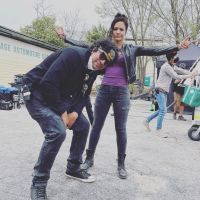