Only 2 episodes left – but at least we know there will be more episodes in the Fall, because the show got renewed for a 3rd Season!

(Spoiler Alert: You will get spoilered about characters and storylines in Seasons 2 and 3 by reading this post and its comments or by clicking on the links provided!)

What’s happening at the moment?
Main production wrapped on March 24, cast and crew celebrating a small Wrap Party in Atlanta for the Atlanta-based crew the next day. Of the main cast, apparently only Lucas Till and Justin Hires attended the festivities, so there were not that many pictures or videos.

There was another wrap party in LA on April 21. Together with some cast and crew members of Hawaii Five-0, Executive Producer Peter Lenkov took his people bowling – to the same location as last year. There was also cake. Lenkov posted several pictures of the event; and took the opportunity to promote the auction of his son’s project “Wyatt’s Garage”.  The main cast signed a hat that was auctioned off for a good cause (the auction closed at 750 US Dollars).

While Justin Hires had uploaded some videos on his YouTube account, Meredith Eaton shared photos of her with Tristin Mays and with her favorite Costume Departement person.

Same as last year, George Eads was not at the LA Wrap Party, but signed the charity-hat on another day so all signatures are there. To make up for George’s absence, some of the LA-based  guest-stars attended the event; e.g. David Dastmalchian, Diogo Morgado (Mac’s friend Carlos from last week’s Episode 2×21), half of the Colton family (Lance Gross and Sheryl Lee Ralph) or Michael Des Barres. Maybe a hint that we will see them again next Season?

Lucas Till had come back from his “Social Media Hiatus” for the premiere of Episode 2×20 (Skyscraper – Power) and posted several more BtS pictures for Episode 2×21 (Wind + Water) last week. It’s nice to see so many writers and cast members come online last Friday after being more or less absent since production wrapped.

We also got some nice BtS photos of the Extras and guest-stars; e.g. via Todd Jenkins or Isabel De La Cruz for Episode 2×21 or via Christopher Frontiero for tonight’s Episode 2×22 (UFO + Area 51). As Todd Jenkins revealed, his wife had created a MacGyver-Cake for the group of friends that watched the premiere of Episode 2×21 with them. Ava Davila (who played Carlo’s daughter in 2×21) has posted several BtS photos, all pictures of her posing with each main cast member and also with her “fake” dad. The crew provided some new BtS pictures as well; e.g. of the pole-crashed car or of the rusted truck before it was rusty.

Season 3 News
You might have already heard that the wait for the official confirmation is over: The Reboot has been renewed for a 3rd Season! Executive Producer Peter Lenkov already gave us a teaser of the new logo after the news hit on April 18 – only to post another, refined version the next day.

There’s no further information yet, but I’m assuming it will be a direct Full Season Order of 22 episodes, with a Premiere date in September like last year.

We might have to wait for the definite CBS timetable until the Upfronts on May 16. But since both Hawaii Five-0 and Blue Bloods have been renewed as well, there is a good chance that the “Trifecta” will stay untouched.

Official Stills, Press Releases and other Promo
At the end of last week’s Episode 2×21 (Wind + Water), Lucas Till took part of a short PSA in the “CBS cares” series; informing about the still devastating situation in Puerto Rico after Hurricane Maria and where you can donate money for Hurricane Relief. (He did another piece on Lupus, which might air next week since May is “Lupus Awareness Month”.)

On April 10, we got the Press Release for Episode 2×22 (UFO + Area 51). There was only one Official Still when I was typing up the blog post this afternoon and not much BtS material for this episode.  Only a few hours ago, SpoilerTV added 3 more Stills, all of them featuring Mac and Jack with racing cars and their pilot. According to comments by Greg Perrow, the NASCAR scene (filmed at the Atlanta Motor Speedway) might be the Opening Gambit for tonight. It seems to be a nod to the Original Show; specifically Episode 4×05 (Collision Course, 1988), so many fans have been interested and asking questions since the first BtS pictures and videos popped up.

There were a few more exclusive storyline insights via TV Line, though: Mac and Riley get the chance to examine a mysterious object that crash-landed in the Nevada desert, while Jack – a “believer” – does not. According to this article, it’s possible that there’s a mini-cliffhanger at the end of the episode.

The Season 2 Finale titled “MacGyver + MacGyver” airs next Friday, on May 4. We already got a bunch of more Stills by April 23, but alas: There was a Jeep, but no sign of MacGyver Senior. It was TV Line that granted us an exclusive First Look of Tate Donovan as Oversight. Yes, I sure can see the resemblance.

The recent pictures shared by Meredith Eaton also seem to be part of the Season Finale; two of them featuring Mac and Matty having a “Dinner Date”.

So far, Season 2 had an average demo-rating of 0.85 with 6.93 million live-viewers per episode. While the audience numbers are falling slightly with every episode, the fanbase isn’t. Last week’s episode brought many people forth – even first-time viewers – who complimened the show on social media, applauding the episode being set in a country that still needs help, despite its situation being more or less “invisible” and therefore unknown to the rest of the world.

Cast and Character News: Is that a Plot Twist I see?
Because there were no news about the Season Finale when writing Update 52, I had combed through the Casting Calls again to see if I had maybe missed the casting for Stand-Ins or Photo Doubles for MacGyver senior. A Call for a Stand-In hinted at Joshua Childs having a part. He would have certainly fit age-wise, but as it turned out by April 10, he’s part of tonight’s Episode 2×22 as a member of the NASCAR pit crew.

The Press Release for next week’s Season Finale (2×23: MacGyver + MacGyver) confirmed that Billy Baldwin (Elwood), Lance Gross (Billy Colton) and Reign Edwards (Leanna) will be back. That’s a lot of potential for some relationship drama and for a change in the team dynamics and maybe even new set locations (e.g. Bozer and Leanna breaking up or Riley moving in with Billy). Kate Bond’s character Jill is listed as recurring cast, which means she will probably be the first recurring character for Season 3.

Although the episode title indicates that MacGyver Senior will be in the episode, there’s no one listed as Mac’s dad – at least not at first glance. So far, the best guess is still that Mac’s father is Oversight, played by Tate Donovan – especially since he’s mentioned as the “special” guest-star who has a history with Matty.

If this not-so-surprising Plot Twist turns out to be true, he hopefully returns as a recurring character next Season as well. After all that build-up with the mystery about Mac’s “missing” dad, it would be a weird choice to not explore the possible fall-out of Mac getting to know the truth while we have so much backstory between Riley and her parents.

MacGyver in Austria
The Reboot continues to do well in Austria. The live-audience numbers have fallen a bit now that the weather gets warmer, but continue to be in the range of 50-60’000 viewers.

The German FreeTV premiere of Episode 1×16 (Hook) will air on Sunday. Curiously, it looks like they will skip Episode 1×19 (Compass) again on their 2nd airing cycle. Some episodes have been cut to fit the FSK12 rating for afternoons (similar to a PG-13-rating in the US), so that shouldn’t be a problem. It’s possible they want to premiere the Episode on primetime, ahead of Season 2. 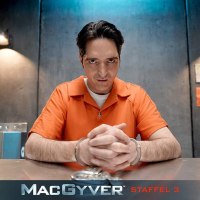