The rebooted Pilot Script for the MacGyver Reboot was written by Executive Producer Peter Lenkov. An earlier version of the script – the Revised Network Draft – has been floating around since October 2016.

There was a Production Draft from June 29 and several revisions (Blue, Pink, Yellow and Green) when they did the first table read on July 8.

I’m taking a look at the Revised Network Draft of the Pilot Script from June 20 (2016).

Scene: In the helicopter

This scene takes place when Mac and Jack are in the helicopter, chasing the bad guys transporting the bio-weapon in the truck to its destination.

The vial of morphine won’t be mentioned again until towards the end of the episode – you’ll see why further down.

There is some more banter and action first before Riley informs them where the (blue) truck is headed:

Original MacGyver was often annoyed by some of Jack’s comments. This scene here doesn’t feel very MacGyver, though. Original MacGyver might have thought Jack was naive and and gullible, but I don’t think he would have ever implied that Jack was mentally impaired.

Also, rebooted Mac and Jack have known each other for years. It seems weird that Jack suddenly finds MacGyver’s fear of heights inconvenient and something that Mac should overcome right now, even though it might have been a topic before.

This scene takes place right after MacGyver and Jack secured the bio-weapon and before everyone meets at MacGyver’s and Bozer’s place; choosing a new name for DXS. 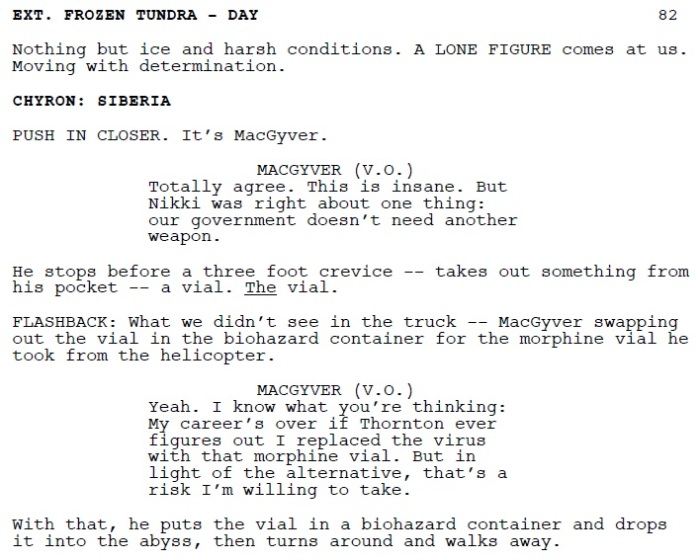 This scene was actually filmed, but got dropped in the editing room – probably for time. I don’t think they had already the idea of “recycling” this for a later episode.

They reshot the Siberia Scene for the Season 1 Finale (1×21: Cigar Cutter), but without any voice-overs because the trip to Siberia happened under different circumstances. I would have actually preferred to see it here in the Premiere Episode. It feels very Original MacGyver; more than the version filmed for the Season Finale.

It shows the rebellious side of MacGyver; the side that is willing to breaking the rules to prevent potential disaster. In the Season Finale Version, Jack and Matty knew what MacGyver was about to do; this was probably even sanctioned by Phoenix and Oversight.

3 thoughts on “Looking Back at Season 1 (XVI) – The Pilot Script: Deleted Scenes (Part 2)” 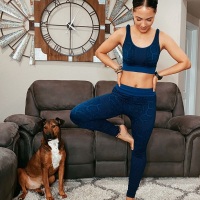