Disclaimer: My original guest-post was first published on The MacGyver Project on September 16, 2016. I made some minor changes (e.g. grammar or source corrections, link corrections, additional pictures) before re-posting it on my own blog for safe-keeping.

Only a week until the Premiere! Filming continues while the promo cycle is in full swing with interviews, new promo pics, talk show visits, screenings, press days on set, preview clips and ringing the New York Stock Exchange Bell. It’s become impossible to keep track of everything!

(Spoiler Alert: To avoid spoilers, I won’t post any too revealing pictures, but you will get spoilered by reading this post or by clicking on the links provided!)

Working on Episodes 4 and 5 (and maybe 6)
Filming continued for Episodes 4 and 5. On September 7, the crew set up at Atlanta City Hall; the atrium masquerading as a train station in Frankfurt, Germany. Several Extras and even the catering crew posted pictures from the set and from behind the scenes.

The next day, production moved locations to film scenes on actual trains. Rigging Key Grip Thomas Browne and Location Scout Gonzo Rey granted us a look at their interesting work environment. According to StandIn Mikey Leo, the scenes were shot at the Southeastern Railway Museum in Duluth. Over the next few days, Extras and crew members shared pictures. Nick Burrell revealed what the crew likes to snack on during a break. Mikey and Briana Lamb taught us some more about StandIn work.

On September 13, the set was invaded by dozens of news stations and interviewers for press day. Reporters and Journalists shared many pictures and videos on social media – so many that I can’t refer to all of them. In this video, Lucas revealed one specific MacGyverism he will be doing on Episode 5. Sounds familiar, no?

Director Bobby Roth gave us an inkling how demanding shooting an episode can be. On September 15, he tweeted that Episode 5 has been wrapped with over 500 camera setups in 8 days.

It is possible that production on Episode 6 already started since Justin Hires just posted another live video on Facebook. During the 7-minute-video, Justin shows us the entire set of New MacGyver’s home; including the contents of his fridge. Right at the beginning, he mentions that they’re shooting the Halloween Episode right now.

Let the Promo continue: Stills and Sneak Peeks
Executive Producer Peter Lenkov posted more pictures of the main characters last week; e.g. of MacGyver, Jack, Patricia and Riley. George Eads also started posting pictures regularly (although his account seems to be disabled right now); like one of a scene he did with Vinnie Jones.

We also got more promotional photos for the Pilot Episode on September 14 via SpoilerTV. One day later, they revealed 3 sneak peek clips. The first one shows the scene with MacGyver jumping off a helicopter (that Jack is flying) onto a driving military truck; trying to save the world. The second clip is the scene that was shot at “Lake Como” in Italy (and includes Nikki Carpenter) while the third one deals with MacGyver and Jack meeting up with Riley Davis in prison to recruit her for a mission.

Let the Promo continue: New York, New York
On September 8, the main trio travelled to New York for promo. Peter Lenkov posted several pictures of George Eads and Lucas Till behind the scenes or meeting the fans.

Lucas and George did a video interview with CBS News. Lucas did an additional single interview (including a preview with new scenes) while George was a guest on “Live with Kelly“. They also did radio interviews (e.g. with Sirius Radio) and posed with NY Police Officers. Later that day, the three got to ring the closing bell at the New York Stock Exchange. After all this work, they finally got to enjoy some pizza.

Let the Promo continue: Big Brother and MacGyvering Pizza Boxes
By the way: There’s no need to throw away your pizza box afterwards, because you can use it to MacGyver a Birdhouse or a Tablet Stand!

After the Iowa State Fair, CBS also promoted the reboot at the Indiana State Fair. The airing of the MacGyver segment on “Big Brother” garnered quite some attention on social media. Apparently, the winner received “a trip for two to the set (…) for an exclusive behind-the-scenes tour of all the action” – although many still complain on social media that the competition was rigged.

Let the Promo continue: Preview Trailers and BtS-Videos
On September 5, TV Promo 360 released another “inofficial” video with a few new scenes. CBS shared a 360°-BtS-Video with an interesting soundtrack. Is this the new theme song we’re hearing? I’m not really a fan of modernized well-known songs, but I could actually accept this. The use of this soundtrack is a bit puzzling though because someone at the MacGyverOnline Forums pointed out to me recently that this one is quite old.

On September 14, CBS released a BtS-Video of a photo shoot with Lucas and George; including the scene with Lucas hanging from the ceiling on a parachute for the official poster. I’m still no fan of the poster, but it looks like shooting it was lots of fun!

Let the Promo continue: Screening for the Georgia National Guard
On September 11, the pilot was shown at a special screening event for the members of the Georgia National Guard and their families at Dobbins Air Reserve Base. Lucas Till grew up on the base and attended the Q&A with his father, along with other cast members. They took their time to pose for photos and answer questions. You can see official pictures of the event here.

Cast and Character News
Central Casting Georgia has made more casting calls; e.g. for caucasian people who have an upscale business attire wardrobe or for men and women to fill spots for FBI, Firefighters, Cops, Bomb Technicians, Soldiers and other Army Personnel. Sounds like lots of action in the next episodes!

In his Facebook Video, Justin Hires revealed some interesting tidbits. We finally know that MacGyver’s home is located in California with a direct view onto the Observatory from the Original Pilot Episode. Also, New MacGyver likes to surf. According to the TVLine-Review of the Pilot Episode and this video from the Press Day on set, Justin’s character Wilt doesn’t know about MacGyver’s true occupation which will lead to some funny situations.

In an Interview with Suzanne Lawler, Tristin Mays revealed that Jack Dalton is her character Riley’s Ex-Stepdad and that they have a love-hate-relationship. I guess we can expect some family drama history being revealed and the possibility of Riley’s mom showing up in a later episode.

On September 15, we got more information on Episode 2 with Amy Acker. We already knew about the synopsis, but the episode called “Metal Saw” was directed by Jerry Levine (Hawaii Five-0, Elementary). 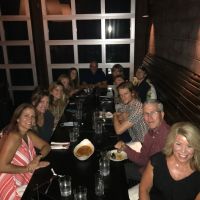